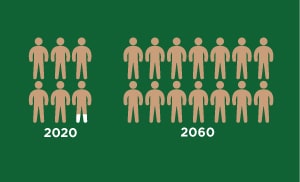 Alzheimer’s disease is a serious condition that most commonly affects older adults of any background or origin, especially among people whose family has a history of Alzheimer’s. As we get older, it is encouraged to get checked up and get a diagnosis. November is Alzheimer’s Disease Awareness Month, and it is an especially good reminder to learn more about this type of dementia, how to spot it, and how to cope with it. Whether it’s during November or any other time of the year, understanding Alzheimer’s disease can improve the quality of life for those with previously undiagnosed Alzheimer’s.

According to the Centers for Disease Control and Prevention (CDC) as of 2020, 5.8 million Americans are known to be living with Alzheimer’s disease and this number is expected to triple to 14 million by 2060. While it is commonly assumed to only affect older adults, the disease can also affect individuals under age 65. Though the risk is much lower among younger people, the risk increases with age, doubling every five years beyond age 65.

Some of the symptoms of Alzheimer’s include memory loss that disrupts daily life, trouble with money or bills, decreased or poor judgment, difficulty completing daily tasks, and changes in mood personality, or behaviors. While there is no known cure for this disease, early diagnosis can help with treatment to manage the symptoms, slow the disease’s progress, and maintain brain health.

Prepare for Medicare Changes in 2023

Do you want to grow old in your own home? Many older adults want to "age in place" - stay in their own homes as they get older - but may have concerns about safety, getting around, or other daily activities. Living at home as you age requires careful planning. A few...

The Multipurpose Senior Services Program (MSSP) is a case management program at Sourcewise designed to help older adults who are at risk of nursing home placement to remain living safely at home. MSSP has been part of Sourcewise since 1986 and serves frail older...

According to the Alzheimer’s Association, millions of Americans are in the “Sandwich Generation”, which cares for both children and aging parents. Being a Sandwich Generation caregiver to both a child and an older adult may be extremely difficult at times, and you may...

Living in a long-term care facility such as a nursing home may often not be the first choice for anyone. Some people have no other option but to live in a facility and for this reason, it is important that their rights are protected.   According to an article...