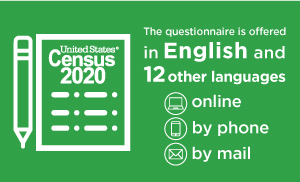 This year, the U.S. Census Bureau is conducting the Decennial Census of population and housing, which is only conducted every 10 years. Each household is required by law to respond and provide the requested information either online, by phone or by mail as indicated within the notices sent. Once complete, the results will be disseminated to the President, the States, and the American People in order to:

In March, American households should have received two letters inviting them to participate in the 2020 Census by responding to the survey online. Americans who did not respond were mailed a reminder postcard and a third letter that included a paper survey. Americans who did not respond after receiving a paper survey, were sent a final reminder during the week of April 20.

According to the U.S. Census Bureau, households who have not responded after the final reminder, will be visited by a Census Bureau interviewer to collect answers in person between May 27 and August 14.

The 2020 Census is available online, by phone or by mail in English and 12 additional languages covering 99% of American households.